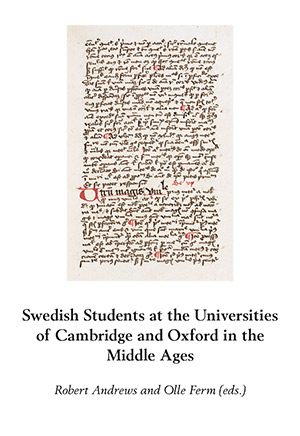 The presence of Swedes among the students and masters at the medieval universities of Cambridge and Oxford has long been presumed, although little evidence remains. Assembled in this volume are several articles and newly-edited documents testifying to the intellectual contribution of Swedish academics in England during the Middle Ages. Items as prosaic as a student’s handbook, a loan chest, and a thank-you letter home witness the experiences of scholars who went against the dominant trend of Scandinavians studying on the Continent.  Sometimes the evidence revealed here has significant ramifications. For instance, the work of natural science prepared by Tideman of Närke is shown to be simple and derivative, but a comparative analysis of the text reveals it to be a piece of a tradition extending from medieval writings on the Termini naturales to the first printed books of the Libellus sophistarum ad usum Cantabrigiensis and the Libellus sophistarum ad usum Oxoniensium, hitherto unnoticed. Original research and critical editions complete the documentation.